A fantastic two-day tournament, the Vilamoura 2017 Algarve Cup, was held at Browns Club in Vilamoura on October 6th and 7th October 2017. Twenty teams entered from both the UK and the Algarve, including a large number of teams from Scotland. 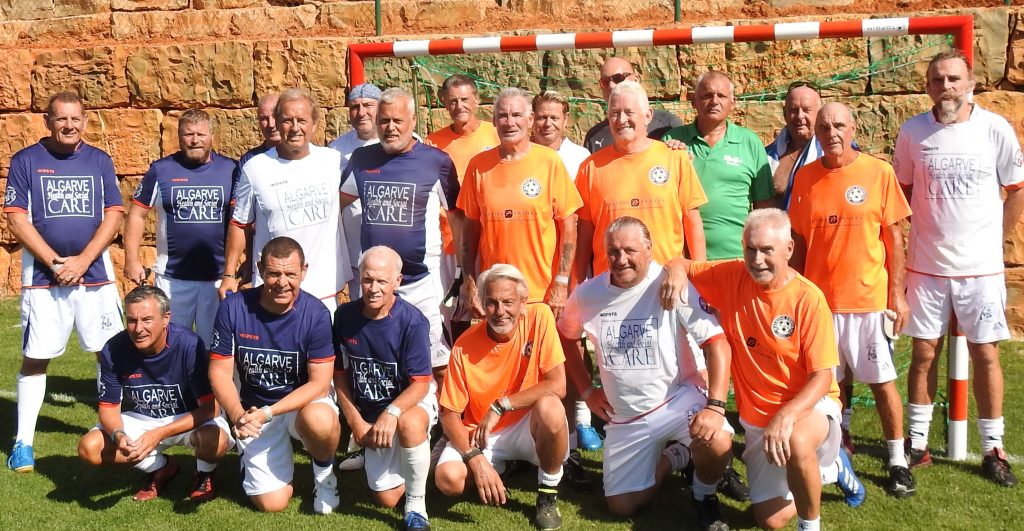 The Olhao A and B teams, together with Tavira A before the start of day 2 (apologies to those missing from the photo, including Yours Truly; no idea where we’d got to as the bar wasn’t open yet……)

Great weather and excellent organisation meant there were 80 matches each lasting 20 minutes over the 2 days. The host club entered a team (Browns WF), and there were four teams from East Algarve Walking Football (Olhao A and B and Tavira A and B; Tavira B were a last minute addition due to the unfortunate withdrawal of Thanet who were victims of the Monarch failure, so well done to all those who volunteered at the last minute to muck in).

Day 1 was a group stage, with 4 groups of 5 teams each playing each other for a place in the final 16.

Group A was dominated by Carnoustie who won three of their four matches and drawing the other to comfortably top the group followed by Tullibody Reds and our old friends Chesterton Crusaders A with 5 points each. These three made the last 16 automatically, while Browns WF and Mansfield Reds finished 4th and 5th, respectively, and entered the play-offs.

Charlie and John in action for Tavira A

Group B saw two teams with excellent and identical records, 3 wins and a draw, both scoring 7 goals and conceding 0, with West Lancs topping the group on the average age of the team putting Chesterton Crusaders B in second spot. Tavira A recorded a 1-0 win in their final group game following two losses and a 0-0 draw to take 3rd place and automatic qualification, with Tullibody Blues and Mansfield Reds B entering the play-offs.

Group C saw reigning champions Olhao A join the last-minute entry of Tavira B. Olhao’s first game was against old adversaries Hearts A (who they beat in last years semi-finals). A fine performance saw them win 2-1. This was followed by wins over Canterbury City (3-1), Tavira B (6-0) and Stamerton Stalkers Navy (3-0) to record a 100% record and top the group. Hearts A and Canterbury City joined them in the last 16, with Tavira B topping Stamerton Stalkers Navy thanks to their 1-0 win over them in 4th place and a place in the play-offs. 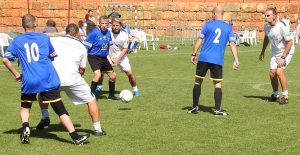 Olhao A in action on day 2

Day 2 saw all 20 teams involved again, but this time in a knock-out formula. First off early in the morning were the play-offs to see who would join the 12 already in the final 16. Unfortunately Tavira B lost both their goalkeeper and main playmaker from day 1 and therefore lost out to Mansfield Reds to go on to contest places 17-20. A narrow defeat to Mansfield Reds B after coming back from 3-0 down to almost force penalties but ultimately losing 3-2 saw them contest the 19th/20th place match, where they unluckily lost on penalties to pick up the wooden spoon. Browns WF fared better and beat Stamerton Stalkers Navy 1-0 to advance to the last 16, where they were joined by Tweedvale, Mansfield Reds and Hearts B.

The last 16 matches saw Browns win again, 2-1 against a good West Lancs side who had topped their group the day before without losing a game. Carnoustie easily overcame Tweedvale 5-1, with Hearts A, Tullibody Reds, and Chesterton Crusaders B also progressing at the expense of Chesterton Crusaders A, Canterbury City and Stamerton Stalkers Black, respectively. Olhao B beat Mansfield Reds 1-0 in a tense game to progress, but Tavira A were extremely unlucky to lose out to Derby County on penalties after a fantastic 0-0 draw that they could have easily won at the death. Olhao A progressed with a comfortable 2-0 win over Hearts B (we seem to play Hearts a lot these days).

The losing teams from the last 16 competed for the Bowl and Wood competitions, with Canterbury, Chesterton A, Mansfield and West Lancs all winning their games to go to the Bowl Cup and the losers, including Tavira A who lost yet again on penalties to Mansfield, entering the Wood Cup. Tavira unfortunately lost their next two matches to finish 16th overall, with Stamerton Stalkers Black taking the Wood Cup (for 13th place) and Canterbury City winning the Bowl Cup (for 9th place).

The main quarter finals saw Browns continue their fine second-day form, narrowly beating Hearts A on penalties. Penalties were also needed for Derby to beat Carnoustie and Olhao B to beat Tullibody Reds, with keeper Paul Shawe not only saving the last Tullibody penalty but then also taking the winning spot kick himself to send them into the semi-finals. Olhao A once again progressed without the need for penalties with a 1-0 win over Chesterton B to set-up an intriguing and much anticipated semi-final clash with Olhao B.

The losing quarter finalists played for the Plate cup, with Carnoustie and Tullibody Reds meeting in the final; Carnoustie took the Plate Cup (and 5th place overall) with a 1-0 win in the final.

The Cup semi-finals saw Browns again winning, this time against Derby County, to reach the final of their own competition. The second semi saw Olhao A take on Olhao B for a place in the final. As everyone regularly plays with and against each other in these two teams it was a spirited but good-humoured game, with tactics playing a large part. Unfortunately for Olhao B, their plans came a little unstuck and the A team eased into the final with a 2-0 victory. 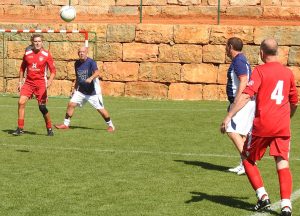 Action from Olhao B

Olhao B were very unlucky to lose the 3rd/4th place play-off against Derby; it was probably the most one-sided 0-0 draw this writer has seen with plenty of chances falling to Olhao B. Unfortunately they could not convert any of them and ended up losing on penalties to finish 4th overall.

The final saw host Browns taking on the current champions Olhao A. Browns took the lead from the penalty spot after an area encroachment from Brian Kilcline and time seemed to be running out for Olhao A as they faced their first tournament loss in their history. Events took a huge turn in the final minutes, however, with Brian Kilcline rifling home after an exquisite pass from Paulo Turni to level things up in the final 2 minutes, and then top scorer Andy Smith smashed in the winner with practically the last kick of the game to deflate Browns and send the Olhao supporters into raptures as they regained the trophy for the third year in a row.

Thanks must go to the organisers and all the staff at Browns who put on a fantastic tournament that gets bigger every year. A very special thanks from all of us here at East Algarve Walking Football to all our team members who played for both Olhao and Tavira, and especially our organiser for this event, Jonathan Syed.

It was also great to see so many players from the UK make the trip over, with lots of familiar faces and friends from Hearts, Chesterton, and West Lancs, and all the new teams that we met over the two days. As always the friendship and camaraderie is what makes these events so much fun, and it’s always nice when the games are played in the right manner. 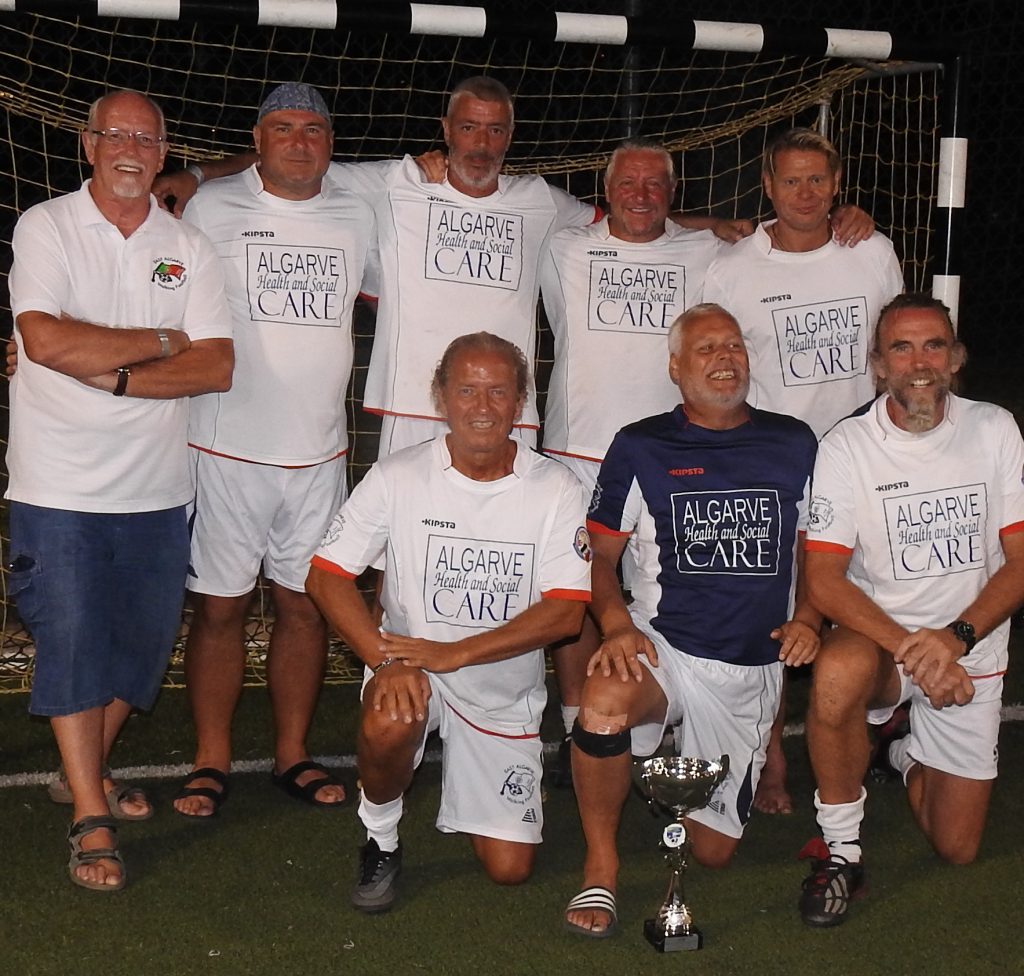 So, Olhao win their 7th tournament in a row and are still yet to lose a tournament they have entered. Once again they have completed a tournament without being beaten (winning all 8 games and scoring 21 goals whilst conceding just 3), but (as with Albufeira earlier this year) the competition is getting stronger day by day. Can they remain invincible? Only time will tell……..

CLICK HERE TO VIEW A VIDEO OF THE FINAL OF THE TOURNAMENT, OLHAO A VERSUS BROWNS WF