The 2016 Algarve Walking Football Cup, held at Browns resort in Vilamoura on the 6th and 7th October, 2016, was a resounding success. Eight teams from the UK and the Algarve took part in the two-day event, with our visitors from Scotland (represented by Ayr United and Heart of Midlothian), Exeter City, and the Potteries (represented by Chesterton Crusaders) joining the local teams from Olhao, Tavira, and Browns themselves. 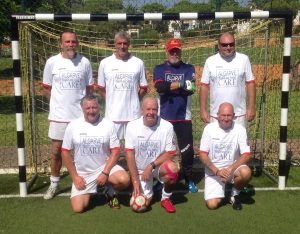 The Olhao A team prepare to defend their title

The first day comprised group games, with two groups of four playing for their positions in the quarter-finals the following day. Group A saw Chesterton Crusaders open with a resounding 3-0 victory over Ayr United, followed by a tight 1-1 draw between Olhao “B” and Browns. The next four games produced only 2 goals, both scored by Ayr United as they narrowly won their remaining two matches 1-0 against Browns and Olhao “B”, with Chesterton versus Olhao “B” and Chesterton versus Browns both finishing goalless. This left Ayr top of the table and seeded to play the bottom club in Group B the following day, with Chesterton unbeaten and yet to concede a goal in second place. Olhao “B” and Browns had identical records, with Olhao taking third place on the toss of a coin. 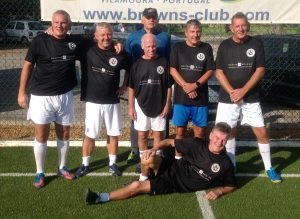 The Olhao B team prepares to do battle

The afternoon session saw Olhao “A” taking on Heart of Midlothian in the first match in Group B. Olhao were slow out of the blocks and soon found themselves 2-0 down mainly due to the left winger for Hearts having too much space, setting one up and scoring the other. They rallied slightly in the second half, pulling a goal back, but ran out 1-2 losers to record their first ever defeat in a tournament game. Exeter City started their campaign against Tavira with a narrow 1-0 victory, but they were then comprehensively beaten 3-0 by Hearts, while Olhao “A” tore apart plucky Tavira 8-0. Hearts completed their 100% record beating Tavira 2-0 in their final game, while Olhao “A” made sure of second place beating Exeter 3-0, who themselves finished third consigning Tavira to fourth place.

Friday 7th saw the tournament come to life. Ayr United came from 1-0 down to beat Tavira 3-1 and avoid an upset in the first quarter final to set themselves up for a semi-final clash with Exeter City, who themselves saw off unlucky Chesterton on penalties after a tight 0-0 draw. The third quarter final saw a local derby as the Olhao “A” and “B” teams met each other. Olhao “A” ran out comfortable 5-0 winners in the end to gain bragging rights in the Eastern Algarve thanks in part to a hat-trick from yours truly, and set themselves up for a semi-final rematch with Hearts, who dispatched Browns 3-1. 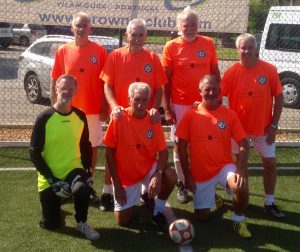 The Tavira team ready for the off….

The losing quarter finalists contested the plate semi-finals, with Chesterton Crusaders and Olhao “B” getting through to the Plate final at the expense of Tavira and Browns, respectively, with the Olhao “B” team’s three goals all coming from Mark Fox on his return from a one-match ban after being sent off along with an Ayr Utd player in the final group game (the first cards of any colour received in an Algarvean tournament, you naughty boy Mark—although it has to be said in his defence that neither were really red card offences). Crusaders won the Plate Final in a very tight game 1-0 against the Olhao “B” team, while Tavira and Browns saw out a goalless draw in the 3rd/4th place plate match, with Browns eventually winning the match on penalties after an unfortunate facial injury to the Olhao “B” keeper (next time use your hands, not your nose, to block  a penalty Andrew!).

The main Cup Semi-Finals produced two great games. Ayr started hot favourites against an Exeter side who freely admitted they expected to finish last in the tournament, and it looked to be going the way of the form book when Ayr took the lead. Exeter, however, showed great resolve in battling back and, after equalising to the delight of the neutrals in the crowd, went on to win in the penalty shootout. The second semi saw Olhao “A” take on Hearts. The Olhao team had learned from their first meeting and immediately pressed the Hearts team almost into submission. Hearts took the lead with a deflected shot off Brian Kilcline’s shoulder wrong-footing Peter Diprose in the Olhao net. Their joy was short-lived, however, as Olhao immediately hit back with two goals in a matter of seconds after a particularly dominant 5-minute display from Brian, and they soon added another one to gain a healthy lead. Andy Smith was having a great battle with the Hearts defender, which eventually overspilled ending in a yellow card for Andy. Olhao never looked in danger from this point on, however, and emphasized their superiority with two more goals to round off a very impressive performance 5-1, with the excellent tactical nous of player/manager Jonathan Syed and stout defending from both Jon Berrill and Roy Clarke seeing them home safely. 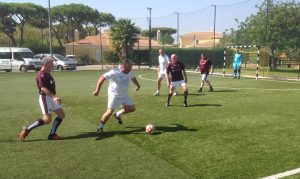 Action from the semi-final between Hearts and Olhao A

Hearts then beat Ayr in a Scottish derby on penalties to gain 3rd place, while the Olhao “A” team unsurprisingly beat Exeter fairly comfortably 3-0 thanks to an Andy Smith first-half hat-trick in the final to retain the trophy they won last year.

The day finished with the presentation ceremony which saw Peter Walpole receive the “Forever Young Trophy” as the oldest player in the tournament (we won’t mention your age here, Peter), and Hearts, Exeter City, and the Olhao “A” team receiving their 3rd, 2nd, and 1st place trophies, respectively.

​Andy Smith of Olhao “A” deservedly picked up the “Player of the Tournament” trophy for an impressive display of goal-scoring throughout the tournament (bagging over half of Olhao “A”’s 25 goals). 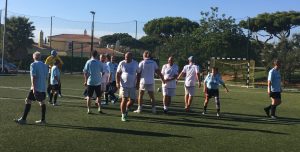 A special mention must go out to Chesterton Crusaders, who didn’t actually lose a game in open play and also didn’t concede a goal (great performance lads), and they also seemed to win the title for drinking and frivolity on both nights by all accounts.

​Tavira unfortunately didn’t win a game all tournament, but the results didn’t tell the whole story; considering they had the oldest squad by far in the tournament, they pushed their opponents a lot harder than in previous tournaments and deserved more success than they got.

​Both Hearts and Ayr must have believed they could make the final, and both will be gutted they only finished 3rd and 4th, while Exeter exceeded all the expectations they had of themselves in making the final, where they eventually had three female players on the pitch. Special mention to Julie, who showed some great touches on the ball and was not the least bit inhibited about getting stuck in to the rough stuff! 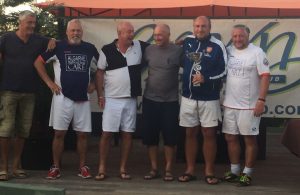 Olhao “A” receive their trophy as Champions for the second year in a row.
From left to right: Neil Morris, Peter Diprose, Jon Berrill, Roy “Nobby” Clarke, Jonathan Syed, and Andy Smith (“Killer” Kilcline unfortunately missed the presentation and is not pictured).

Olhao “B” will feel aggrieved they came up against a very strong Olhao “A” side in the quarters, otherwise they would have fancied going a lot further than they did, while Browns seemed to struggle with injuries leaving them without a steady side.

Overall, a fantastic tournament hosted and run extremely well by Browns; we thank all the officials and the medic for helping it run smoothly and for the constant provision of water on what was a baking hot two days. Massive thanks also to Roy McCrudden for the photography and all the pictures on our website and Facebook page.

​On to the next one in Albufeira on March 20th 2017, where Olhao “A” will once again try to keep their 100% tournament win run going after their victory last year………. 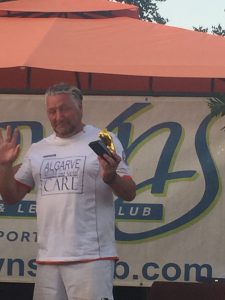 Andy Smith gets the player of the tournament award 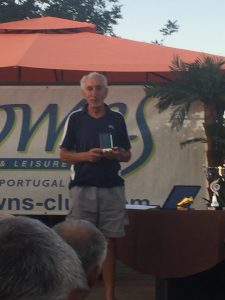 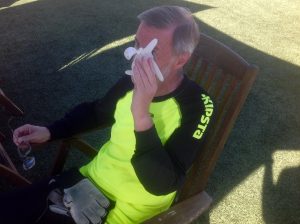 Note to self, when attempting to save a penalty put your hands in front of your face….. 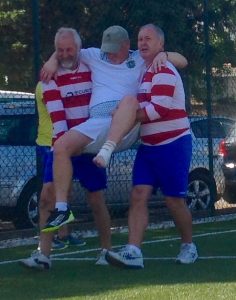 I am getting too old for all this….