Teams from all over Europe and another from South Africa played two days of gruelling walking football under hot Algarvean skies.

The over 50s tournament saw 8 teams play in one league over day 1 (and the first game of day 2), with Tavira and Olhão representing EAWF, while the over 60s saw 11 teams take part (including Tavira and Olhão) split into two groups of 5 and 6 on day 1.

Both EAWF clubs started slowly, with Tavira losing to Benfica in their first match (0-1) and Malaga in their second (0-2). Olhão drew with the reigning champions Luso Africa (1-1) before also losing to Benfica (0-1). Both teams then found some form, with Tavira beating Bilbao 3-1 before a creditable 2-2 draw with Luso Africa. Olhão meanwhile hit a winning streak, with vistories over Seaton Carew (2-1) and SC Farense (2-1) before beating Tavira 2-0. In the final games on day 1 Tavira kept alive their chances of a top 4 finish and a place in the main Cup competition by beating Seaton Carew 2-1, while Olhão lost 3-1 to Malaga in a game they were comfortably winning 1-0 at half-time to keep their place in the top 4 in doubt.

Day 2 saw the final round of league games, with Olhão 2nd in the group behind Benfica, and Tavira a lowly 6th. However, the closeness of all the teams meant every team still had a chance to finish in the top 4 and make the Cup League. In a must-win final game, Tavira saw off SC Farense 3-0, while Benfica lost to Luso Africa 1-0. This meant Olhão needed a draw against Bilbao to finish second and also elevate Tavira to 4th place. They duly delivered (1-1) to see both EAWF teams into the Cup League where they were joined by Benfica and Seaton Carew, with Bilbao consigned to the Plate group on goal difference, joined by Luso Africa, Malaga FC and SC Farense.

The top 4 teams then played each other on a league basis, with the top two to contest the Grand Final, while the bottom 4 contested the Plate Trophy on the same basis.

The evenness of the teams was again apparent as Benfica and Olhão drew 0-0, Tavira and Seaton Carew drew 1-1, and then Benfica and Seaton Carew drew 0-0. Olhão then faced Tavira for the second time in two days, and repeated their day 1 victory with a close 2-1 triumph to move to the top of the group. This left Tavira bottom of the table and needing a result in their final game; a 1-0 victory over Benfica moved them up to second in the group. Seaton Carew could still pip them though, but Olhão helped their teammates out by beating Seaton 1-0 in the final group game to emphatically finish top and set up a Championship final between the two EAWF clubs.

In the Plate trophy league, Luso Africa and Bilbao were both unbeaten and played the Trophy final, which was won by Luso Africa.

In the main Cup trophy, the final was a tremendous game; like their previous two meetings Olhão took the lead, but this time Tavira gave as good as they got and took the lead themselves twice before a dramatic last minute equaliser by Olhão’s Jesus (for his hat-trick in the final) meant the game finished 3-3 and sent the match to penalties. Here Olhão stumbled badly for the second time in 5 days as they had done at Vilamoura and missed their first 2 penalties, with Tavira holding their nerve to win the Championship. Huge congratulations to both teams on making it a first 1-2 for EAWF in their tournament history. 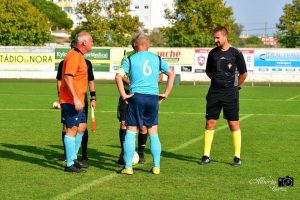 The toss before the final with captains Mick C and Foxy 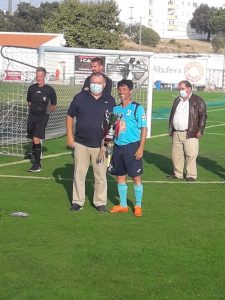 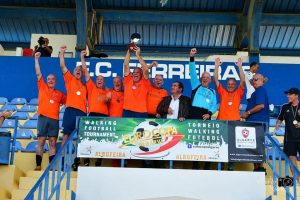 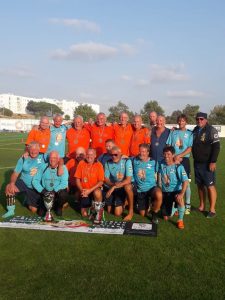 The two EAWF teams with their trophies

In the over 60s tournament, Tavira were placed in the group of 6 with SC Farense, Letsby Avenue, 1874 Northwich, Bilbao and Real Exiles, while Olhão were in the group of 5 alongside Malaga, Odiaxere, Browns and Seaton Carew. 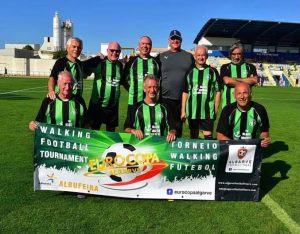 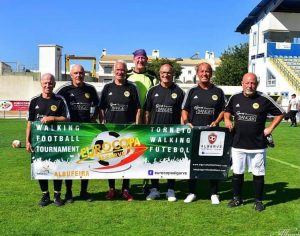 Tavira found the going tough from the start, with a 0-3 loss to Letsby followed by a 0-2 defeat to Northwich and defeat to SC Farense by the same scoreline. They managed some pride in drawing with Bilbao 1-1 in the final game on day 1 and then drawing 1-1 with Real Exiles at the start of day 2. This was not enough for a top 3 finish, however, and they were therefore through to the Plate competition.

Olhão also started badly with a 0-3 loss to Seaton (which would cost them dearly in the end), but they rallied with a 0-0 draw against Browns before beating Malaga 3-2. A 1-1 draw with Odiaxere finished their group games and put them 3rd in the group which meant they were through to the Cup group.

In the over 60s plate, 5 teams played each other in a league with the league winners to be crowned Plate trophy winners. Tavira started well, with a 1-1 draw against Browns, but a 1-3 defeat against Malaga dented their chances of silverware. A 2-0 win over Real Exiles brought some pride back, but a final match defeat to the eventual Plate winners Bilbao (0-3) left them 4th, ahead of Browns in last place.

The six teams in the Cup trophy were split into 2 groups of three, with the winners of each group to meet in the Championship decider. The first match in Olhão’s group saw Seaton Carew beat Letsby 3-1 to take a hold on the group, but Olhão then beat Letsby by the same score to make the final game the decider for first place. A tight 1-1 draw was the outcome. This left Seaton and Olhão with identical records, but the team through to the final was Seaton on the basis of their earlier win over Olhão on day 1.

Olhão narrowly lost to Odiaxere in their play-off game to end up in 4th place overall. Seaton Carew went on to beat the winners of the other cup group, SC Farense, to take the over 60s Championship. 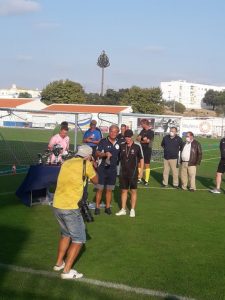 First of all, huge thanks to Gary at Algarve Football Tours for organising yet another great event. You can see loads of pictures and videos on their facebook page (click here). Also, thank you to all the referees and everyone else who helped out over the 2 days.

Well, where do we start? A first 1-2 for EAWF at a major tournament, following on from over 60s success at Vilamoura only days earlier. Two tournaments in 5 days and we end up with 2 Championship trophies, 2 second places, a third place and 2 fourth places. Huge success for EAWF, and proof that we are still competing with the best and coming out on top after all these years.

It was hard going for everyone involved in the club to organise, manage and play so many matches in such a short space of time. Many thanks to all the players who stepped in at very short notice for the Albufeira tournament following injuries etc. at Vilamoura and all the managers and especially Jon Syed for moving everyone about and ensuring we got 4 teams with enough players to take part. Not sure many of us are capable of so much football these days!

It was a tremendous tournament, with all teams playing to the spirit of the game with barely a bad tackle made. Some games were a bit brisk for the definition of walking football, but others were probably the best examples of how walking football should be played – fast moving ball, but slow moving players.

Special mention must again be made to Olhão over 60s, who narrowly missed out on a chance of a Championship by the smallest of margins as they did at Vilamoura. Your time will come guys.