Just twelve months after their formation the Soccer Olhanense Strollers have won one of Europe’s top Walking Football awards.

The fast growing sport, for those over 50 years of age, has seen thousands of mature adults dusting off their trainers, donning shirts and shorts, strapping up ankles and knees, and returning to the pitches they left many, many years ago. 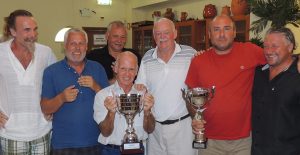 Under a clear blue sky the astro-turf pitch and surroundings at Browns Sports and Leisure Club looked resplendent as action got underway. An intense round of twenty group games produced winners and losers who then girded their loins for the next day’s knock-out stages. Saturday arrived and the UK teams might have thought they had been transported back home! Continual rain throughout the day failed to dampen the enthusiasm of the competitors with Cove Rapidly Ageing Pensioners winning their semi-final 4-0 against Browns Walking Football. In the other semi-final Soccer Olhanense Strollers (S.O.S.) beat Hartshill Strollers 1-0.

The final was a fabulous advert for Walking Football with both teams showing some fine touches and great skill. There was an intriguing tussle between Mick Quinn (Cove) and former Coventry City FC captain Brian Kilcline (SOS) with the Soccer Olhanense Strollers edging the final 1-0. It was sweet revenge for the defeats suffered by the Soccer Olhanense Strollers when Cove visited Olhão back in February and demonstrated how the players fitness levels and skills had improved. 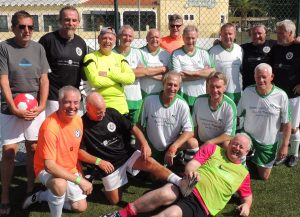 Winners of the plate competition, for losing first round teams, were Chesterton Crusaders who beat Cove Rapidly Ageing Pensioners 2nd team. Brian Kilcline won the ‘Player of the Tournament’, as voted for by all the teams, whilst 74 year-old Wolfgang Eudenbach (Laranja Layabouts) was presented with the ‘Forever Young Award’ for the oldest player in the competition.

Alan Brown, owner of the Leisure Centre who made some outstanding saves playing in goal, said, “this event has been a tremendous success and we look forward to more teams contesting next year’s tournament.”