Following on from our success at last year’s tournament, East Algarve Walking Football (EAWF) entered four teams for the third Albufeira Walking Football Cup, held on Monday and Tuesday 19th/20th March 2018: Olhao A and B, and Tavira A and B. Thus 40 hardy souls from the Eastern Algarve joined those from Lagos (Boavista) and Vilamoura (Browns), plus our friends from the Silver Coast near Lisbon (with two teams), along with 5 teams from the UK (Sheffield United, Oxford United, our old friends Brackley Saints A and B, and a representative UK team calling themselves TG Algarve).

We all descended on a cold, wet, and blustery Estadio Nora in Ferreiras, just north of Albufeira, for two days of walking football and camaraderie brilliantly organised by Gary at Algarve Football Tours.

The EAWF representatives ready for battle

As usual, day 1 was the group stage with the 13 teams split into two leagues. League 1 saw Olhao A and Tavira B joining Oxford Utd, Browns, Brackley A, Silver Coast B, and Boavista, while League 2 saw Ohlao B and Tavira A joining Sheffield United, Brackley B, Silver Coast A, and TG Algarve.

The first match of the day was between Olhao A (winners of the previous two Cups in 2016 and 2017) taking on debutantes Oxford United. With their usual slow start, Olhao were behind 3-1 with only a couple of minutes to go when they finally woke up and managed to sneak a 3-3 draw. However, they followed this with victories against Tavira B (10-1), Brackley A (4-1), Browns (4-1), Boavista (5-0), and Silver Coast B (5-0) to comfortably finish top of their group.

Oxford United easily took second place, although a surprise last game defeat to Brackley A left them 3 points off top spot. That victory for Brackley A gave them 4th place in the group and a place in the quarter finals, level on points with Browns in 3rd. Silver Coast B finished 5th and missed out on the quarter finals due to their final game loss to Olhao A, with Boavista finishing 6th courtesy of beating Tavira B, who unfortunately lost all 6 of their matches.

Olhao B started with a tough match against Sheff Utd, and were quickly behind. They eventually lost 4-0 without really getting going. They recovered from this by beating Tavira A (4-2) and then gained a creditable draw against last year’s semi-finalists Silver Coast a (2-2). Further wins against Brackley B (2-1) and TG Algarve (4-0) saw them finish 3rd in their group on goal difference from the Silver Coast A in 2nd, and Sheff Utd in top spot. Brackley B took 4th place with a large gap to TG Algarve and Tavira A occupying the bottom two places having managed to draw with each other and lose every other game.

Day 2 saw the top four teams from each league meet in the Cup Quarter Finals, while the other five teams were entered into the Plate League where they would all play each other once to determine the Plate Winners

Silver Coast B, Boavista, Tavira B, TG Algarve, and Tavira A played a round robin league format to determine the Plate Trophy.

Tavira B managed a win and a draw in their four games, beating TG Algarve 2-1 and drawing 1-1 with Boavista, but two defeats meant a fourth place finish ahead of TG Algarve who lost all five games. Boavista beat both TG Algarve and Silver Coast B to take second spot ahead of Silver Coast B, while the undoubted team of the day were Tavira A, who won all four games without conceding a goal to take top spot and the Plate Trophy

The victorious Tavira A team (from left to right: Ross, Mel, Dave C, Roy, Peter D, Andy and Charlie; missing are Mike H, who unfortunately had to shoot off for a flight back to the UK, and John W for some reason)

The draw for the Cup Quarter Finals saw Olhao A drawn against Olhao B once more. Following their meetings at Vilamoura in the semi-final in October last year and in the quarter-final in October 2016, Olhao B were out for revenge and should by rights have taken it. They were the better team by far in the first half but couldn’t score (the story of their tournament really, again). Andy Smith scored the only goal of the game to break Olhao B hearts once more and send Olhao A into yet another semi-final.

The losing quarter finalists played off for 5th to 8th places, with Olhao B and Oxford winning their play-offs to meet in the 5/6th place play-off. A tight game was decided by a single goal for Oxford, meaning Olhao B ended up in 6th place. Brackley A beat Browns to take 7th spot overall in the consolation match.

The Cup Semi-Finals saw Olhao A meet the Silver Coast A team in a repeat of last year’s semi-final. Olhao A produced their best performance of the tournament and stunned the Silver Coast by taking a 5-0 lead at half time. Manager Jon Syed rang the changes for the second half but Olhao still ran out 6-2 winners. The other semi saw Sheff Utd continue their impressive form easing past Brackley B by a single goal.

Silver Coast A took 3rd place overall thanks to a 2-1 victory in the 3/4th place play-off, leaving Olhao A and Sheffield United to contest the final.

The final was a great game with Sheffield United showing why they are English Premier League (EPL) champions. Clinical finishing from Andy Norcliffe and Dave Middleton gave them an early 2-0 lead, and they passed the ball around very easily, keeping possession for long periods. Olhao managed to put the pressure on towards the end of the first half and won a series of free-kicks around the goal, but couldn’t get a clear shot on target thanks to some great defending by Sheffield. Olhao finally pulled a goal back courtesy of an Andy Smith free-kick in the second half and had a couple of other chances to force a draw, but Sheffield United deservedly hung on to win the match 2-1. 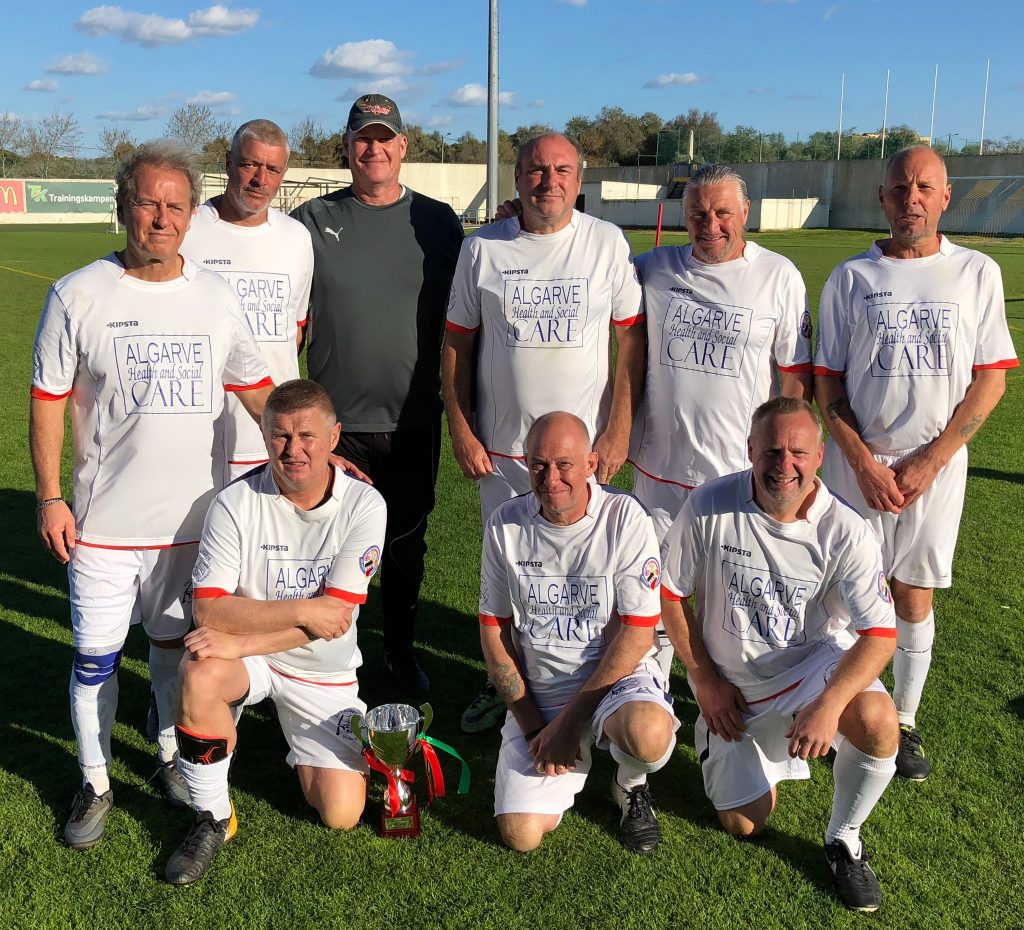 So, a first tournament loss for Olhao A after 7 straight victories. It must be said that Sheffield United were the team of the tournament and fully deserved their victory, but Olhao will hopefully bounce back at Vilamoura in May. They did manage to score 39 goals in 9 matches, winning 7 games, drawing one, and only losing in the final to the current EPL Champions, so all is not doom and gloom. Special mentions must go to Derby Dave and Karl Chapman who made their A team debuts as well as Paul Shawe who stepped up in goal to cover the injury to Peter, and Paolo Turni who won the Golden (“Glass”) Boot for top scorer. Goals were scored all over the team, with Karl and yours truly getting quite a few from midfield, plus the usual contributions from Andy Smith and player/manager Jon Syed up front. Nobby Clarke and Mick Coleman provided the usual stout defence. 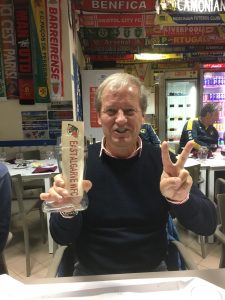 Paolo with his glass boot

Olhao B came up against some good opposition in their group games and did well to get to the quarter finals with ease. If they could manage to avoid Olhao A in a tournament they would go far! Even then they were unlucky not to progress (again). Special mentions must go to Mark Wilson and Henrik who both donned the gloves following Paul Shawe’s promotion, Tom and Paul playing their first tournament for us, and the usual mature performances from Eddie, Frankie, Steve M, and Jon B. Many thanks to Foxy for organising and managing the team as well.

Both Tavira teams struggled in the group games, but Tavira A produced probably the performances of their lives to take the Plate Trophy, the first silverware they have picked up. A fantastic performance all round from “running” John W, Peter Dick, Mel, Mike H, Rossi, Charlie C, Chris W, Dave C, and Roy M, and led brilliantly by Rugby Andy. Hopefully Tavira B enjoyed their two days, despite the results, and thanks to DJ Mike for taking on the management of the B team.

Special thanks must go to Gary for organising another brilliant tournament, to all the referees who (mostly) got it right and helped make the whole event fun, the announcer and scorer, all the catering staff, and everyone else who helped make it a great two days.

Most of all, and as always, thank you to all the teams who made it such a friendly tournament. It was great to meet up again with familiar faces from the Silver Coast, Browns, Boavista, and Brackley, and wonderful to meet up with the lads from Oxford, Sheffield, and the nomads of TG Algarve. You all did yourselves, and walking football in general, proud. Hope to see you all again soon! 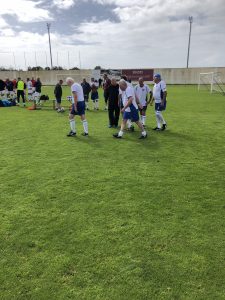 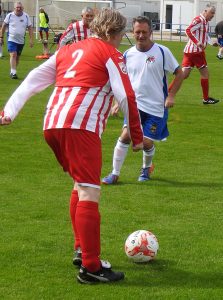 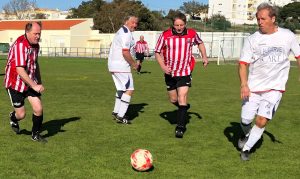 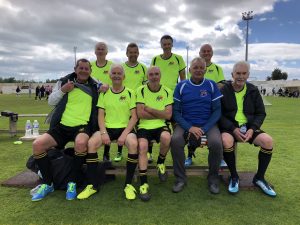 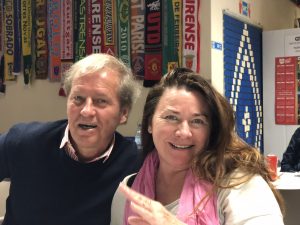 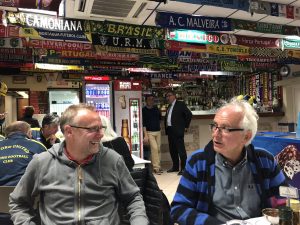 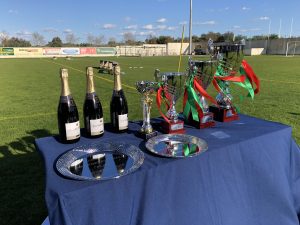 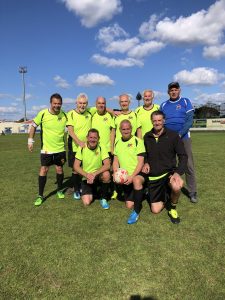 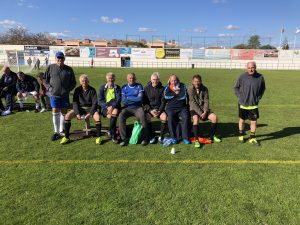 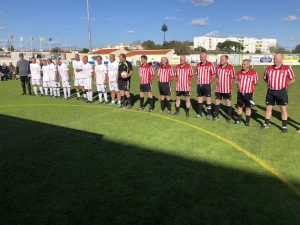 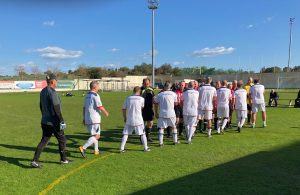 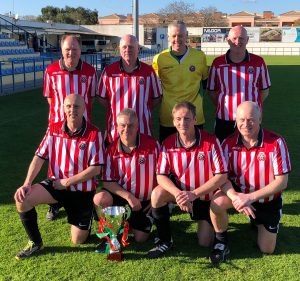 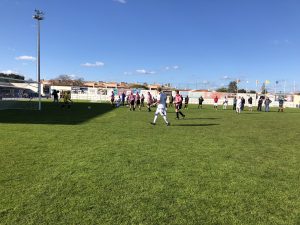 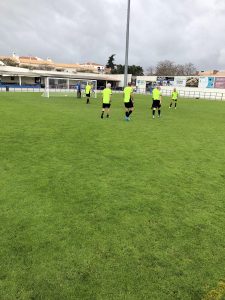 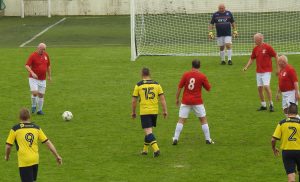