The 5th Algarve Walking Football Cup was won by EAWF Olhao over 50s team for the fifth year in a row at the tournament in Vilamoura on October 4th and 5th 2019! 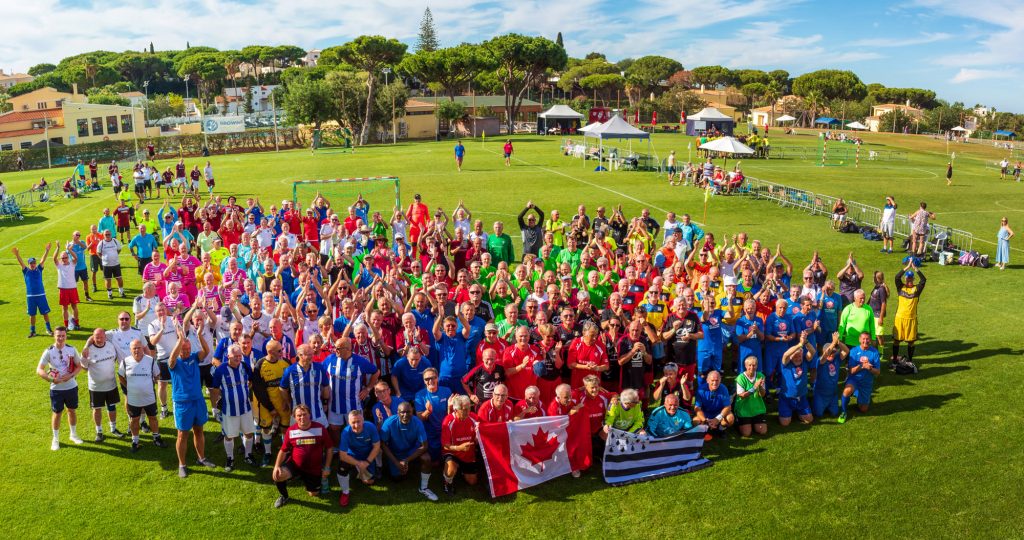 Some of the 36 teams at Browns, Vilamoura 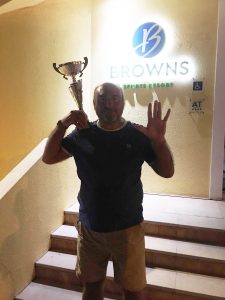 5 in a row; Jon Syed with the trophy

Following a poor first day performance that saw them finish only 2nd in their group with a 2-0 win over Shrewsbury, a 1-1 draw with Sheffield Wednesday and a 0-2 loss to Ayr United, EAWF Olhao over 50s improved game by game on day 2, dispatching Browns B 1-0 to reach the quarter finals, Tullibody FC 1-0 to reach the semi-final and Browns A 3-1 to reach the final, where a stubborn Manchester Greats team were eventually beaten 1-0 thanks to a wonder strike from Karl Chapman. 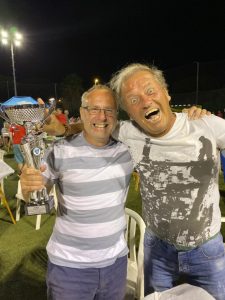 Winning goalscorer Karl with the trophy, and our very own Pavarotti…….

The Tavira over 50s team remained unbeaten on day 1, beating French team Roz Chas le Trevoux 1-0 and drawing 0-0 with both Derby County and Manchester City to finish second in their group well ahead of the bottom two. Unfortunately, their lack of goals let them down on day 2, where they lost on penalties to Manchester Greats (the eventual finalists) following a 0-0 draw in normal time. This meant they ended up in the bottom 8 playing for the Wood and Bowl trophies. Their first loss in normal time (0-1 against Shrewsbury) saw them enter the Wood trophy semi-final, where a penalty shootout win over Derby County and a Wood trophy final win over Roz Chas le Trevoux (1-0) saw them lift the Wood trophy but unfortunately only 14th place overall. There record was outstanding though, with only one defeat in normal time over the 2 days.

The Olhao over 60s team played equally as well in their tournament, topping their group of 5 on day 1 and remaining unbeaten with wins over Birmingham (6-0) and Ormskirk North (2-1) and draws against Exeter City (1-1) and Derby County (1-1). Unfortunately, and as with Tavira over 50s, they succumbed in their first match on day 2, losing to the second Birmingham team on penalties after a 1-1 draw in normal time to miss out on progression into the main Cup competition. A victory over Derby County (1-0) saw them into the Bowl semi-finals, where another penalty shootout loss (against Tweedvale) saw them into the third place Bowl match where a 1-0 win over Tullibody saw them take 11th place overall out of the 20 teams. Remarkably, they didn’t lose a single game over the 2 days in normal play but failed to bring home any trophy.

Between them, the three EAWF teams only lost 2 matches throughout the whole tournament, but we obviously need to practice our penalty taking to reach the dizzy heights of more silverware.

A mention must go to our very own Peter Walpole, who again picked up the Forever Young award at the age of 80, representing the Oakville Wild Walkers courtesy of a last-minute, big-money transfer