Finally the spring weather arrived, and a glorious sunny day welcomed the 16 teams to the Browns Walking Football Tournament, held in Vilamoura, on May 4th and 5th, 2018.

The usual format was followed, with a first day of group games, and a second day of knockout matches to give overall Cup winners and Plate, Bowl, and Wood tournaments for those exiting at various stages.

Tavira White led from the front in Group B, beating their fellow challengers Clitheroe 3-1 after falling a goal behind early on, then dispatching PNE Team One 1-0, and our Sao Bras team 5-0. Clitheroe bounced back from an opening defeat, beating Sao Bras 8-0 and PNE Team One 3-0 to finish second with Sao Bras and PNE Team One ending on one point apiece after their first round 0-0 draw.

Tavira Blue began their Group C matches with a creditable 1-1 draw with a very good Portsmouth Blues team, with Portsmouth winning both their remaining two matches, 3-0 against Browns 2 and 1-0 against Thanet Barbarians, to top the group. Tavira Blue missed out on second place after losing to Thanet 1-0, whilst beating Browns 2 by the only goal. Thanet’s victory over Tavira plus their draw with Browns 2 gave them second place on countback, with Browns 2 finishing bottom with just a point.

All 16 teams entered the last 16 matches first thing on Friday morning, with 1st playing 4th from the group stages and 2nd playing 3rd. 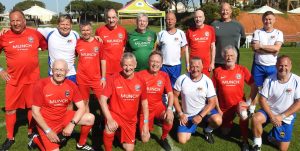 AM Soccer Club and Tavira White before their last 16 match

Group A winners Olhao White easily overcame Sao Bras 3-1 to book their place in the Cup/Plate Quarter-Finals, where they were joined by the other group winners Tavira White (who beat AM Soccer 3-1 on penalties after a 0-0 draw in normal time), Olhao Yellow (who overcame Browns 2 by their fourth straight 2-0 win), and Portsmouth Blues (who beat their fellow club members Portsmouth Blacks 3-0). All the second placed teams from the group stages also advanced to the main Quarter-Finals with PNE Equipe beating an unlucky Tavira Blue on penalties after a 0-0 draw, Browns 1 beating PNE Team One 2-0, Thanet Barbarians beating Long Bennington 1-0, and highly fancied Clitheroe beating Portsmouth Yellows on penalties. 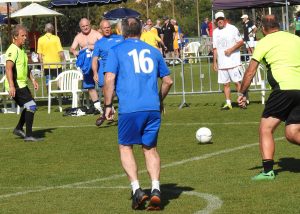 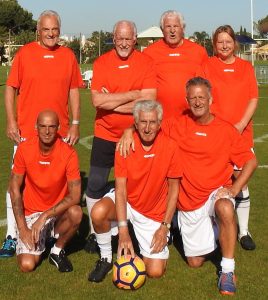 The Sao Bras team (well, most of them anyway)

The eight losing teams from the last 16 contested the Wood and Bowl Cups, with Tavira Blue (courtesy of a penalty shoot-out win over AM Soccer), Long Bennington (beating Sao Bras), Portsmouth Yellows (beating Browns 2) and Portsmouth Blacks (recording their first win of the tournament over PNE Team One) making the Bowl semis. AM Soccer Club beat Sao Bras in their Wood Semi-Final to reach the final against Browns 2 (who overcame PNE Team One), with AM Soccer Club taking the trophy on penalties in the final. Sao Bras beat PNE Team One in the consolation match to avoid finishing last in the tournament. 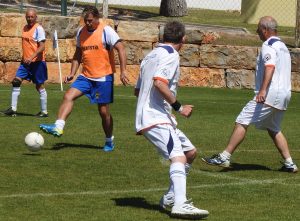 The Plate Trophy was lifted by Browns 1 who, after beating Clitheroe 1-0 in the semi-final, then proceeded to beat PNE Equipe on penalties to finish in 5th place overall. Clitheroe overcame the other losing semi-finalists, Thanet Barbarians, in the consolation match to take 7th place.

That left the two Cup Semi-Finals, where EAWF teams Tavira White and Olhao White had to play each other. A tight game ended in a 0-0 draw, mainly thanks to Henrik’s outstanding goal-keeping display, and Olhao White caused a bit of an upset (though they would argue otherwise) by taking victory in the resulting penalty shoot-out. The other Semi-Final saw Olhao Yellow take the lead courtesy of Brian Kilcline goal, but the efforts of the two days took its toll in the second half and a tiring and injury-struck team failed to hold on to their lead, losing two goals and thus the match to a very fit Portsmouth Blues team.

Action without a ball in the 3rd/4th place play off between Olhao Yellow and Tavira White (from left to right: Andy S, Yours Truly, Paolo, Mick C, Derby Dave and Jon S)

That meant Olhao Yellow took on Tavira White for the 3rd/4th place play-off, a game that wasn’t taken too seriously given the circumstances. Olhao Yellow did triumph on penalties in the end to clinch third place, mainly because they were laughing less. 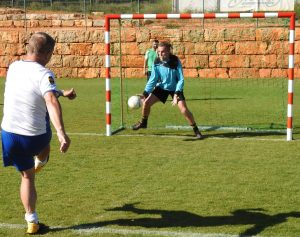 One for the record books! Killer Kilcline dons the gloves in the play-off after pulling a hamstring in the semi-final, and then saves a pen from Mick C to help take third place

The Cup Final saw Olhao White take a first-half lead against the more fancied Portsmouth Blues thanks to a great goal from Paul Marsh and a sterling effort saw them hold on till the middle of the second half when an unfortunate penalty decision went against them for entering the goal area (which looked distinctly like unavoidable momentum to those watching); Portsmouth nevertheless took advantage and equalised, forcing the game to a penalty decider. Portsmouth Blues greater nerve showed through, and Olhao White unfortunately lost the shoot-out to finish runners-up. 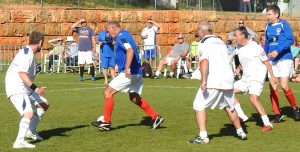 Action from the Final; from left to right for Olhao White are Paul M, Frankie and Mark Wilson 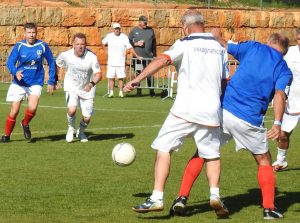 More action from the Final – is that a tackle from behind Frankie?

As always, this was a fantastic tournament, organised superbly by Joao Verela at Browns who provided excellent facilities over the 2 days. Thanks must also go to the referees who kept us all on the straight and narrow (for the most part), and the medical staff who were on call for the minor injuries.

Special thanks must also go to all the teams and players who, once again, showed great commitment but also fairness and helped make the tournament such an enjoyable event. Whatever happened on the field of play was quickly forgotten afterwards, and plenty of reminiscing was to be heard over a beer at the end of the day. We hope to see you all again soon.

Finally, a special thank you to the players and officials from EAWF who ensured we managed to enter five teams, three of which finished in the top four – a great result (just a shame we missed out on top spot!):

Plus, the various WAGS and hangers on who supported us through thick and thin and ran around with bottles of water etc.

(Apologies to anyone I’ve missed; send us a message and I’ll add you in!)