The 6th Algarve Walking Football Cup brought more success for EAWF at the tournament held in Vilamoura on October 8th and 9th 2021.

Following a year of non-competitive walking football due to the pandemic, we managed to field 5 sides at the annual Browns tournament – three over 50s sides and two over 60s.

Both competitions involved 8 teams from Europe split into 2 groups of 4 on day 1; each team played the other 3 in their group to decide the line-ups for the quarter-finals and the remaining knockout groups on day 2.

Tavira over 60s were joined in group A by two of the three Dutch Cambuur teams, along with Browns.

They started their group against one of the favourites in this competition Browns. With only 1 substitute (Johan) available to the team, options were always going to be limited. So a 1-0 defeat was seen as a learning curve rather than a huge disappointment.

A change in formation resulted in a 2-2 draw in the second game against Cambuur Bruin (both goals scored by Nobby Clark.)

The 3rd and final game of the league competition was against another of the Dutch clubs, Cambuur Jong, but Tavira were now playing to their strengths and sticking to the plans of Simon Judd, the manager. This final game resulted in a comfortable 4-0 win (3 goals by Nobby Clark and 1 for Valentino)

This was a great result as the goals scored lifted Tavira to 2nd place in the league table, ensuring them a game against the 3rd placed team in the other league in the quarter-finals on day 2 which turned out to be Cambuur Barto.

Olhão over 60s were in group B with the third Cambuur team, along with Sauchie Juniors and Exeter Strollers. Olhão managed to complete three wins out of three, beating Exeter 1-0, Cambuur Barto 2-1 and Sauchie Juniors 2-0, to easily top their group giving them a quarter-final tie on day 2 against the Cambuur Jong team who finished bottom of group A.

Day 2 saw Browns (who finished top of group A) draw 0-0 with Sauchie Juniors (who finished bottom of group B) and the first surprise of the tournament saw Sauchie Juniors win through 2-1 on penalties. Tavira were facing the 3rd of the Dutch teams, Cambuur Barto. Due to the limited option of players the same 5 players were starting again. This was a game they dominated, but were kept at bay by an excellent Dutch keeper; the match ended in a 0-0 draw, but they won through on penalties 2-0 (Nobby Clark and Nigel Baker).

Olhão overcame Cambuur Jong 1-0 to book their place in the semi-finals, where they were joined by Cambuur Bruin who beat Exeter 2-0.

Unfortunately the draw meant that Tavira and Olhão faced each other in the semi-finals. Although Tavira were definitely the underdogs, the game was a very even affair, which perhaps was unsurprising as the players know each other so well. Again the game ended in a 0-0 draw, Tavira holding their nerve to this time win 2-1 on penalties and reach the final (Nobby Clark and Valentino). The other semi saw another 0-0 draw, with Cambuur Bruin getting through on penalties. Olhão went on to comfortably beat Sauchie Juinors 4-0 to finish 3rd in the tournament and pick up a trophy which was the least they deserved having won 5 of their 6 games over the two days and drawing the other one.

The final was Tavira against Cambuur Bruin who had drawn their match the previous day. Perhaps unsurprisingly this game was destined for another draw, as it was a very tight game with few chances for either side, although the better of the few chances created were for Tavira. And so to the dreaded penalty shootout.

After the first 3 penalties the scores were 2-2, which meant they went to sudden death. Tavira’s central defender for the tournament Peter Dickinson bravely stepped up to take his first penalty of the competition and buried it. Which meant the pressure now fell to Tavira’s keeper Jan to save the next kick and win the competition, which he did with style to ensure Tavira were crowned champions.

Tavira over 60s are crowned champions

Fittingly, Jan was voted by the other teams in the competition as “The Most Valued Player” and was given a special award at the end of the day. No doubt his efforts throughout the competition, along with Peter’s defensive work and the tireless walking of Nigel and Valentino in midfield and Nobby Clark as an outlet up front, with Johan as sub, proved that with guidance and support from a manger such as Simon a surprise result is possible. 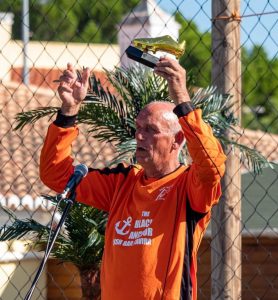 A special mention to Peter Walpole as well, who picked up his usual “Forever Young” award as the oldest player at the tournament. 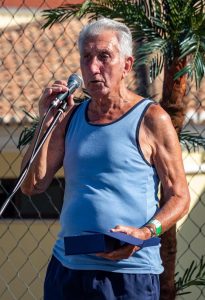 Olhão started day 1 in their normal slow fashion with a tight 0-0 draw against Farense, before smashing Sporting Ramsgits Blues 4-0. Unfortunately their final group game resulted in a 1-0 loss to Clitheroe in a game they pretty much dominated but just couldn’t score which left them in third place in their group.

In group B Tavira beat both Moncarapacho (2-0) and Sporting Ramsgits Yellow (2-1) before earning a very creditable draw with Kingsmaid (0-0) to finish 2nd behind Kingsmaid on goal difference. Moncarapacho lost their other two matches to finish rock bottom of group B.

Day 2 saw a massive shock in the first game, with Moncarapacho holding the winners of group A Clitheroe to a 0-0 draw in normal time before beating them 2-0 on penalties. This took them through to the semi-finals of the Cup for the first time ever. Again the draw went against EAWF teams, with Tavira and Olhão facing each other in the third quarter-final. The usual tight game saw a narrow 1-0 victory for Olhão to put them in the semis and confine Tavira to the Plate competition.

Olhão and Moncarapacho then faced each other in the semi-final, where an easy 4-0 victory for Olhão booked their place in the tournament final against Kingsmaid. Tiredness was telling by now, and a drab 0-0 draw led to penalties where Kingsmaid held their nerve better to score all 3 and win the Cup 3-2. Moncarapacho narrowly lost to Farense on penalties to finish 4th in the tournament, an excellent achievement for them. Tavira unfortunately came up against Clitheroe in the Plate semi-finals who were one of the best teams in the tournament and a narrow 1-0 loss saw them finish 7th overall.

A fantastic result for Tavira over 60s, becoming the first EAWF over 60s side to win a major tournament. This keeps our run going of winning the tournament at Browns every year since it started. Well done to Olhão over 60s on a fine performance that deserved better than their third-place trophy. Olhão over 50s narrowly lost out on a sixth consecutive Browns Championship, and well done Moncarapacho on coming 4th (even though they didn’t score a goal all tournament). Tavira over 50s also deserved better than 7th, with the luck of the draw not helping them in the early stages of day 2. 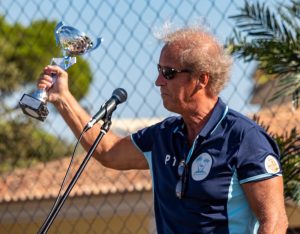 It has to be said though that the format of this tournament left quite a lot to be desired. Both teams that finished 4th in their age groups did so without winning a game in normal time, or even scoring a goal. In the over 60s, both Olhão and Browns won 5 of their 6 games and drew the other and yet finished 3rd and 5th. Too many games on day 2 went to penalties as in previous years (mainly due to the very small goals), and a static penalty kick was something no teams had played before so there was a lot of confusion and no little luck in who won and who didn’t. Maybe points that the organisers could improve in future years…

Full results can be downloaded by clicking below: