A bright, if breezy, start to the day welcomed the 12 teams to the 2nd Albufeira Walking Football Cup, held at the Estadio Albufeira, on March 20th 2017, with Olhao A attempting to retain the trophy they won there last year.
​
The tournament was a 7-a-side affair held on three pitches with six teams from the UK (three teams from Xcel Walton, plus the Eccles Cake Walkers, Wigan Walkers, and Brackley Saints) joining six teams from Portugal (Tavira, Boavista of Lagos, Browns of Vilamoura, and two teams from Olhao representing the Algarve, and the Silver Coast Strollers representing mid-Portugal). ​ 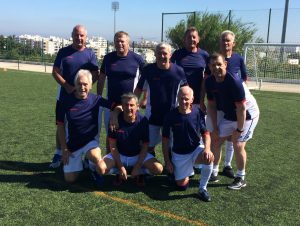 The Olhao “B” Team prepares to do battle……
From left to right, back row: Frankie, Eddie, Paul, Mike and Charlie; front row: Ross, Mark, Jimmy and Steve. The keeper (Peter) was absent due to socialising on the touchline at the time….

The morning matches were group games, with the teams split into three groups of four. The top two from each group would progress to the quarter-finals, plus the two best third-placed teams, with the remaining third-placed team joining the bottom team in each group in the Plate semi-finals.
​
Group A consisted of Walton A, Wigan Walkers, Olhao A, and Brackley Saints. Wigan and Olhao both won their opening two games against Walton A and Brackley; Ohlao A beat Brackley 3-0 (with goals from Andy Smith (2) and Neil Morris) and then Walton A 2-0 (with goals from their Italian dynamo Paolo Turni and Gorgeous George Allen). The group decider ended level at 0-0 between Olhao and Wigan, with Olhao topping the group by virtue of their better goal difference to give them a quarter-final place against the Eccles Cake Walkers. Walton A and Brackley both failed to make the quarter-finals, and were only able to enter the consolation Plate Trophy.
​
Group B consisted of the Silver Coast Strollers, Walton B, Browns, and Olhao B. Olhao B won their first game against Browns 1-0 thanks to Steve Maddocks goal, and then drew their remaining two matches 0-0, enough to place them in second place in the group behind the impressive Silver Coast team and earn themselves a quarter-final tie against Boavista.
​ 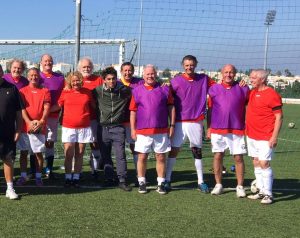 The Tavira Team before the Plate final……

Boavista had the best record in the group stages, winning all three of their games in Group C. Tavira were unlucky to lose all three of their group games, with Steve Johnson getting their only goal in a 2-1 defeat to Boavista. They were left with a semi-final place in the Plate Trophy where they would meet Brackley Saints. Eccles Cake Walkers finished second in group C, with Walton C in third place.
​
The knockout rounds started in the afternoon with the Plate Trophy semi-finals; Walton A gained their passage to the Final in the first semi, while Tavira beat Brackley 1-0 thanks to a Paul Shawe goal in the second. Unfortunately Tavira came unstuck in the final, losing 0-5. However, their performances are getting better each and every tournament.

​
The main Trophy quarter-finals saw Olhao A up first against the Eccles Cake Walkers, where a relatively easy 3-0 victory (with goals from Andy Smith (2) and Neil Morris) gave them passage into the semis to meet the Silver Coast side who progressed from their half of the draw. Olhao B played out a tense quarter-final with Boavista which ended 0-0, with the Olhao B team coming out on top in the penalty shoot-out 3-2. The remaining quarter-final saw Wigan Walkers progress to set up a semi-final meeting with Olhao B. 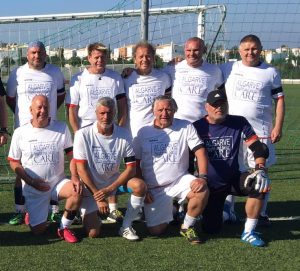 Olhao B were slightly unlucky to go out at the semi-final stage, where a Steve Maddock goal gave them a 1-0 lead against Wigan before a defensive slip and a dubious penalty gave the Wigan team a narrow win. In the second semi, a cracking game between Olhao A and the Silver Coast was decided by two excellent free-kicks taken by Jon Berrill, scoring one himself and laying the other on a plate for Neil Morris.
​
That gave Olhao A and Wigan the chance for glory in the Final. The match went the same way as their group game, with Olhao dominating possession but being unable to find a way through Wigan’s resolute defence. A 0-0 draw was almost guaranteed and that’s the way it ended, despite a disallowed goal for Olhao A by George Allen for running and a close effort saved well by Peter Diprose from the Wigan forward. On to penalties, and Andy Smith scored with the first for Olhao. Wigan scored from their first spot kick to level things, a feat repeated by Olhao’s Mick Coleman to restore their lead. Peter Diprose then saved Wigan’s second, allowing George Allen the chance to win it with the final kick. This was duly dispatched, and Olhao A were crowned champions again, winning 3-1 on penalties.
​
Trophies were presented to all teams, and captain Jonathan Syed accepted the Albufeira Trophy as captain of Olhao A. A few beers and an excellent end-of-tournament dinner followed, with many of the players then heading into town to carry on the celebrations.
​
The tournament was a huge success, with all those taking part enjoying themselves. The matches were all played in an excellent spirit, with the referees having little to do; certainly no cards needed to be handed out.
​ 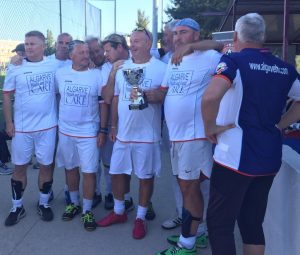 The Olhao A Team receive their trophy after another tournament victory

The Algarvean teams did themselves proud; Tavira reached their first ever final, and the Olhao B team were unlucky not to make the final. Boavista of Lagos had the best group-stage results and remained unbeaten in open play for the tournament. However, Olhao A once again stole the show, winning their fifth tournament in a row with yet another undefeated campaign and no goals conceded in open play – they have yet to lose a tournament they have entered. The standard of the opposition is getting stronger all the time, though, with both Wigan and the Silver Coast providing very strong opposition. Can they keep their dominance going? We’ll have to wait till next time to see.
​
Huge thanks to Gary at Algarve Football Tours for organising a great tournament, and to all the officials, entertainment people, all the partners and spectators, and all the other players. A fantastic day.
​