Following the disappointing results at EuroCopa at the end of April, East Algarve Walking Football (EAWF) bounced back to victory at the 5th Browns Walking Football Festival in Vilamoura on May 6–7th 2022.

Olhão over 50s were crowned Tournament Champions in their competition, while Olhão over 60s finished runners-up following a penalty shoot-out loss in their final.

Six teams entered the over 50s tournament, with EAWF Olhão and EAWF Tavira being joined by SC Farense from Faro, plus Billericay Town, Carnoustie Panmure and Clitheroe from the UK.

All six teams played each other over the two days, with the top two then meeting in the Trophy Final.

Olhão and Tavira faced each other in the first game, and despite Olhão dominating the play a stout Tavira defence saw the game end in a 0-0 draw. Olhão’s second game saw them take a first half 2-0 lead against Billericay thanks to a brace from new signing Billy Quinn. Despite a second half penalty letting Billericay back in to the game, Olhão saw out the 2-1 victory. Tavira’s two remaining games on day 1 produced two more draws — 1-1 against local rivals Farense (with John Dwyer scoring) and 0-0 against Carnoustie, while Olhão kept up their strong start with a 1-0 victory over Clitheroe thanks to Colm’s goal.

Thus the table at the end of day 1 was as follows:

Day 2 saw the remaining two league games for each team, with the first game seeing Farense drawing 0-0 with Carnoustie. Tavira then played Billericay with another 0-0 result. This meant Olhão only had to avoid defeat against Farense to guarantee a top two finish. They duly managed this with a comfortable 0-0 draw. Tavira’s final game was a must win to give them any chance of making the final, but a disappointing second half saw them fall to a 3-0 defeat to Clitheroe. Billericay and Clitheroe played the penultimate game which ended 1-0 to Billericay, while the final game saw the already guaranteed top two Olhão and Carnoustie play out a relaxed and enjoyable 0-0 match.

In the play-off matches for silverware, Tavira were playing only for pride, but unfortunately lost their 5th/6th play-off against Billericay 2-1 on penalties despite heroics from Foxy in goal. Clitheroe gained 3rd place overall, beating Farense in their play-off final on penalties.

This left Olhão and Carnoustie to meet again in the Trophy Final. An early goal from Mo, plus a first-half penalty conversion from Mark C gave Olhão a comfortable 2-0 half-time lead. They managed the game brilliantly in the second half and never looked in trouble to claim consecutive victories in this tournament. 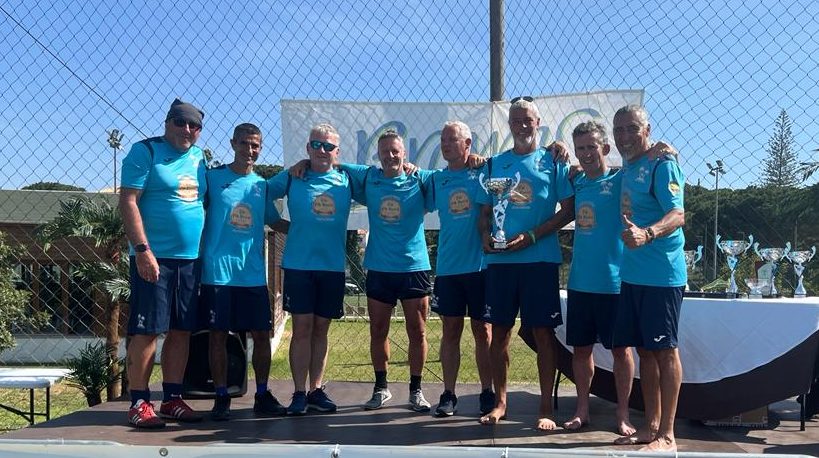 A special mention must be made that neither of our over 50s teams had a recognised goalkeeper in their squads, with Foxy bravely keeping them out for Tavira, and Mo, Julio and Verner all helping Olhão to victory. Unfortunately we don’t have a photo of the Tavira team at this stage, but we must mention everyone in the squad: Foxy, Andy S, Eddie, Barry, John D, Glenn and Trevor, with Jon Berrill the non-playing manager.

Twelve teams entered the over 60s tournament, with three groups of 4 playing league matches on day 1. Olhão were pitched into group B along with Senior Army 2 from Belgium, SC Farense and Ipswich WF. Tavira were in Group C alongside Carnoustie, Billericay Town and Browns 2 (from Vilamoura). 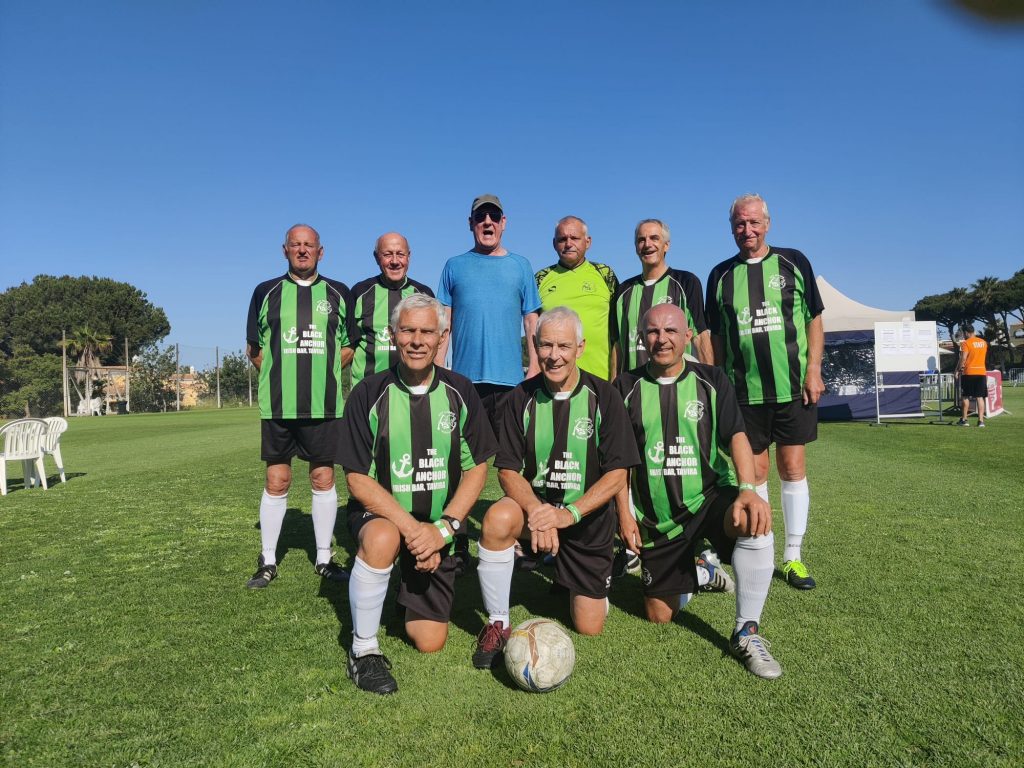 Olhão started their campaign brightly (unusually for them), overcoming Senior Army 2 by a 3-1 scoreline with goals from Bjorn, Mick C and Paulo, before beating old rivals Farense 1-0 in their second game with Paulo getting the winner. A strong Ipswich team narrowly defeated Olhão 1-0 in their third game, but this left Olhão in second place in their group and a qualification game on day 2 against the third-placed team in Group C, which turned out to be Carnoustie.

Tavira found it harder going, and 2-0 defeats against both Browns 2 and Billericay meant even their brave 0-0 draw against Carnoustie couldn’t stop them finishing bottom of Group C and the prospect of a daunting qualification match against the winners of Group B Ipswich on the following day.

The tables from day 1:

Day 2 saw all 12 teams play a qualification game to decide who would progress to the Cup & Plate competitions and who would enter the Bowl & Wood competitions. Tavira faced strong opposition in Ipswich, but they performed admirably to only lose 1-0, a loss which placed them in the Bowl/Wood competitions where they were joined in Group G by Preston North End and Clitheroe. A 1-0 loss to PNE and a respectable 0-0 draw with Clitheroe unfortunately saw them finish bottom of their group which took them into the Wood final, where a very eventful 1-0 victory over Senior Army 2 avoided the ignominy of last place and sent them home with the Wood trophy. 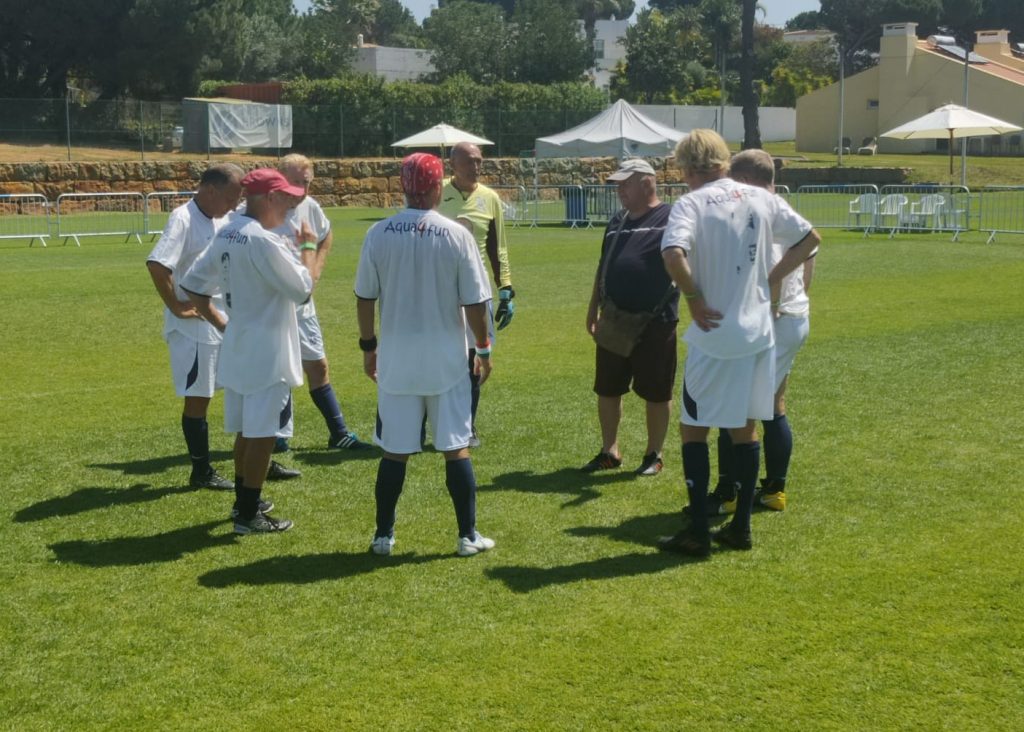 Olhão played Carnoustie in their qualification match in a tight game. After drawing 1-1 in normal time with a goal from Mick C, Johan saved Carnoustie’s first two penalties, and successful conversions from Paulo and Conny produced a 2-0 penalty shoot out victory which saw them qualify for the top 6, where they were joined in Group D by Browns 1 and Browns 2. Two 1-0 victories against both Browns sides (Conny scoring a screamer against Browns 2 and Mick C getting the winner against Browns 1) meant they topped Group D, which earned them a place in the Trophy final against the winners of Group E, which turned out to be Farense after their victories over Ipswich and Billericay. Despite beating them in the first group stage, the final was a very tight affair with both teams missing chances to win it in normal time. This led rather predictably to the dreaded penalty shoot-out where Olhão failed to score resulting in the runners-up spot in their Trophy Tournament. Special mention must be made to Paul Cassidy and 71-year-old John Walduck who didn’t get too much game time, but both played their part when called upon. Boss Stuart described them both as “invaluable”.

A great result for EAWF, winning the over 50s tournament and almost doing the “double”, with the over 60s narrowly losing out in the final to SC Farense. The over 50s squad has evolved over the past year and are still very much finding their feet, while the over 60s have been strengthened by former over 50s winners moving up an age group. The over 60s in particular will only get stronger in the coming years, with the newcomers in the over 50s squad already starting to gel as a good team. On to Vilamoura in October, where the overseas teams will be stronger than ever….

Many thanks to Paul Burn, Jon Berrill and Stuart Meakin for extra information, names etc.