The usual format saw group games on day 1 to determine the seeding for the knockout rounds on day 2, with teams then playing an elimination opener on day 2 to see if they would play in the main Cup Trophy, the Plate Trophy or the Bowl and Wood Trophies.

EAWF Olhão, unusually for them, started brightly in their quest for more silverware at Browns. Playing in Group C on day 1, player/manager Jonathan Syed along with Julio Rito, Mark Wilson, Jesus Ruiz, Mo Sabet, Mark Cruddace, Verner Baird and Karl Chapman secured a 2-1 victory over Billericay Town with goals from Mo and Julio, which was followed by the same result and scoreline against the fancied Grimsby Corinthians side after coming back from a goal down with two strikes from Mark Cruddace.

A comprehensive 3-0 final win on day 1 against French side Roz Chas Le Trevoux with two goals from Verner and the other from Karl saw them lead their group table with maximum points.

Day 2 saw EAWF Olhão carrying on their good form with a 2-0 victory over Browns in the quarter finals with goals from Jesus and Mark Cruddace earning themselves a classification game against old rivals and friends Kingsmaid to see who progressed to the Cup semi-finals.

It was EAWF Olhão who triumphed by a single goal to nil (with Jesus again the scorer) to give them a semi-final place in the main tournament against our local foes SC Farense B. EAWF Olhão won the tussle 2-1 with another goal from Jesus and one from Verner to put them into the tournament Cup Final yet again.

Here they came up against Grimsby Corinthians again after they had beaten EAWF Tavira in the other semi-final. Once again EAWF Olhão overcame their opponents, 2-0 this time with goals from Jesus and Julio, to claim yet another Cup and Tournament victory at the Algarve Walking Football Cup. 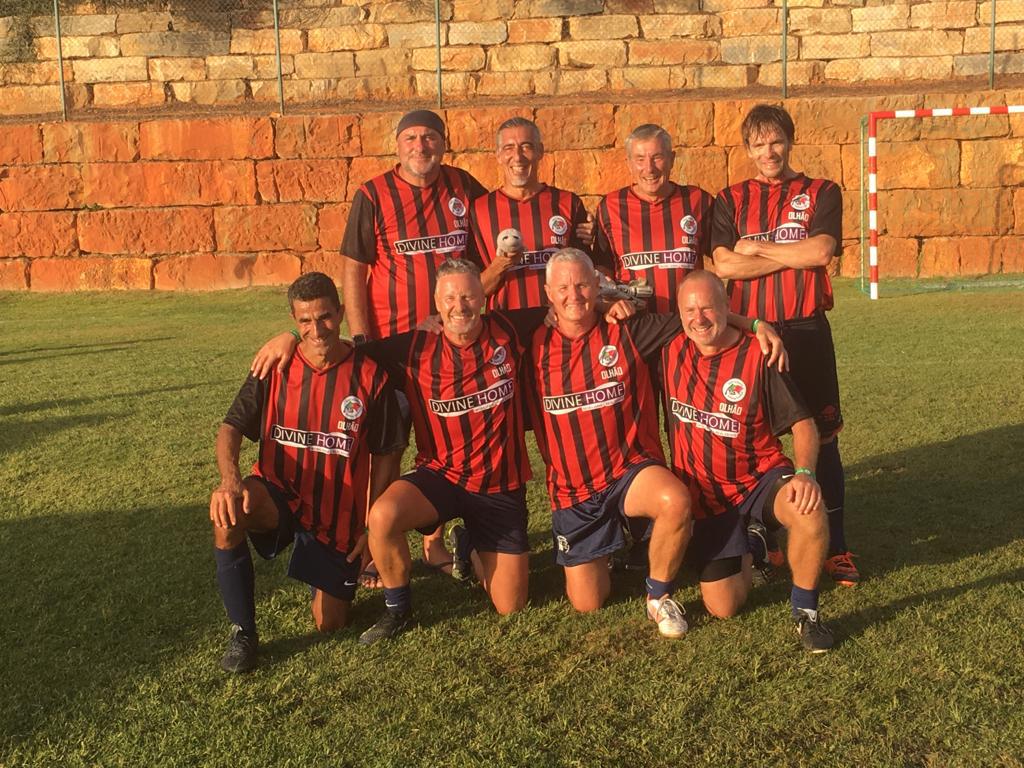 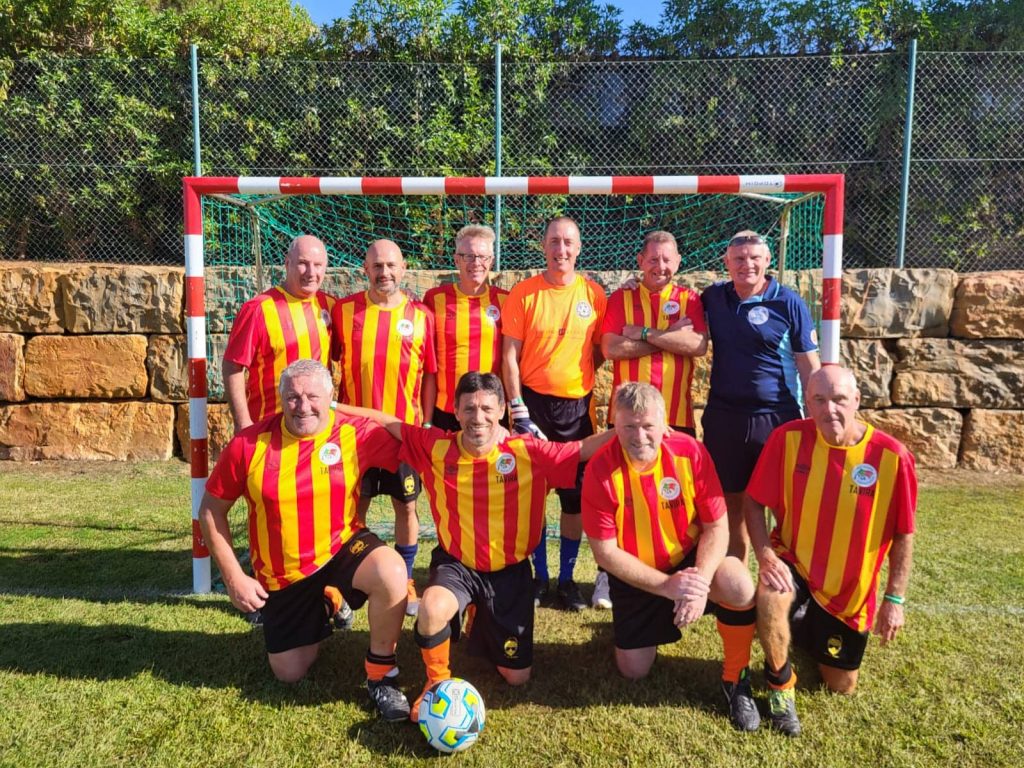 They started day 1 with a creditable 0-0 against strong side Kingsmaid, but unfortunately a lack of goals told, with 0-1 defeats to both Shrewsbury and Melksham leaving them in 4th place in Group A after day 1.

A change of manager on day 2, with Foxy taking over the reins to allow Andy to play, showed dividends. Day 2 started with a fantastic 1-0 victory over old foes SC Farense A with the only goal scored by Alfredo to put them into the elimination round for the main Cup semi-finals.

A penalty shootout victory 2-0 over Hearts following 0-0 in normal time with penalties converted by Tony and Alfredo saw them having to face Grimsby Corinthians in the Cup semi-final. Unfortunately this proved one step too far and Grimsby ran out 1-0 winners.

EAWF Tavira then lost their 3rd/4th place-off on penalties 2-1 to SC Farense B with Tony scoring our penalty to finish in 4th place overall. Patrick was amazing in goal, and won the team’s player of the tournament. 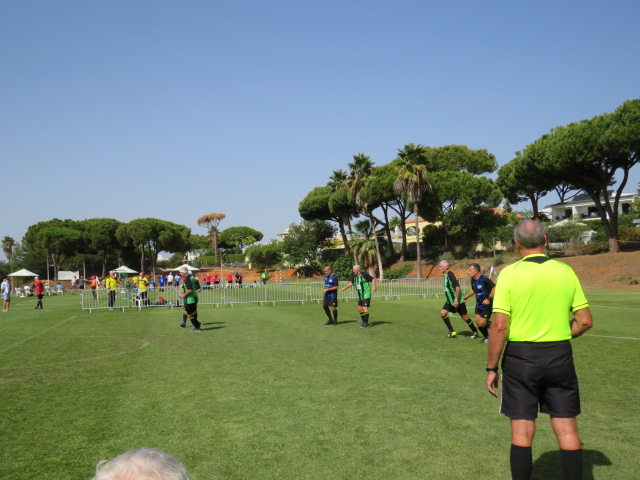 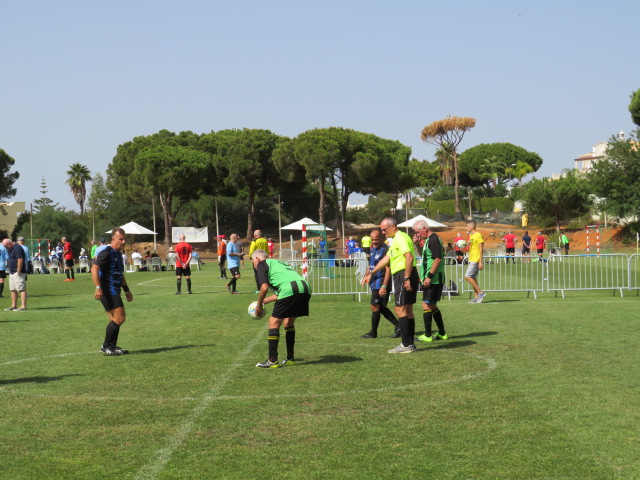 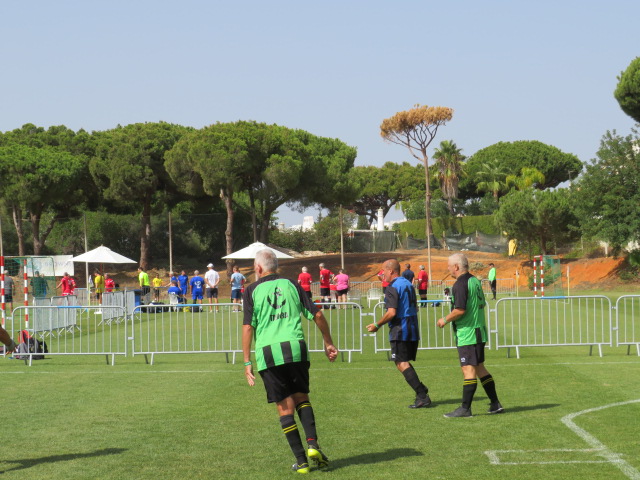 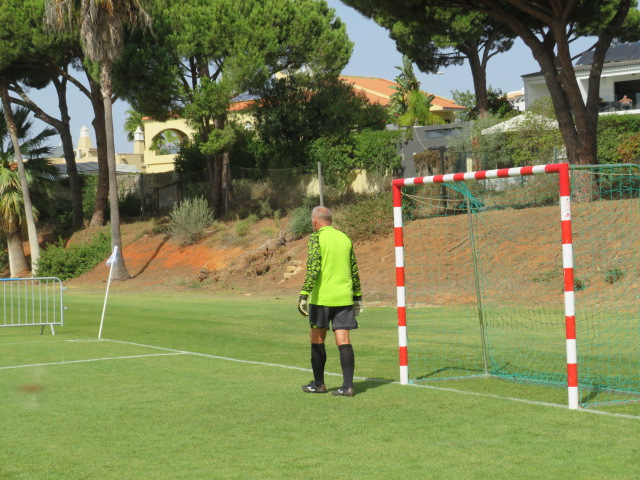 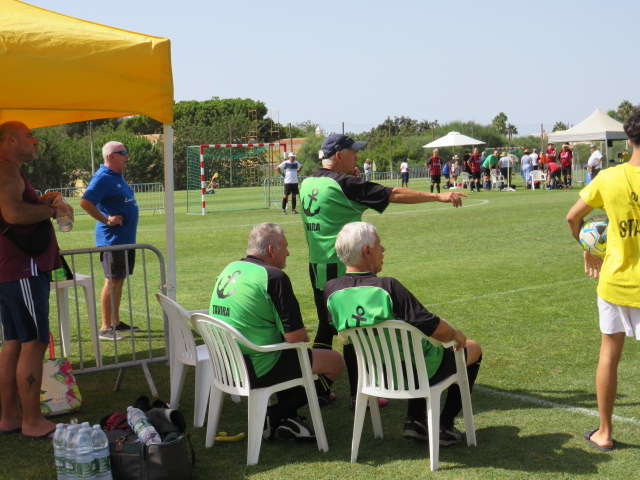 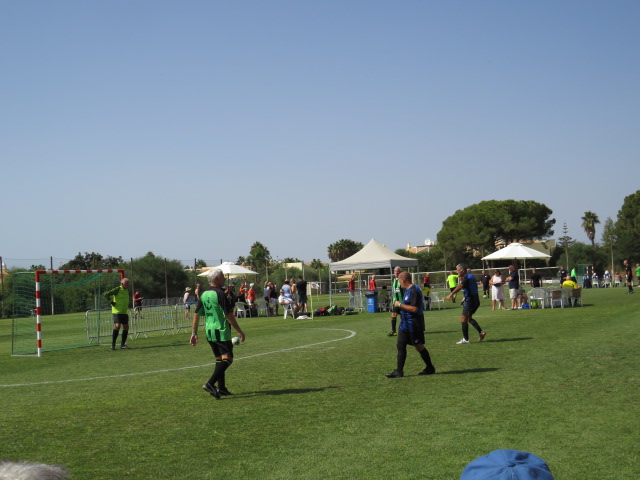 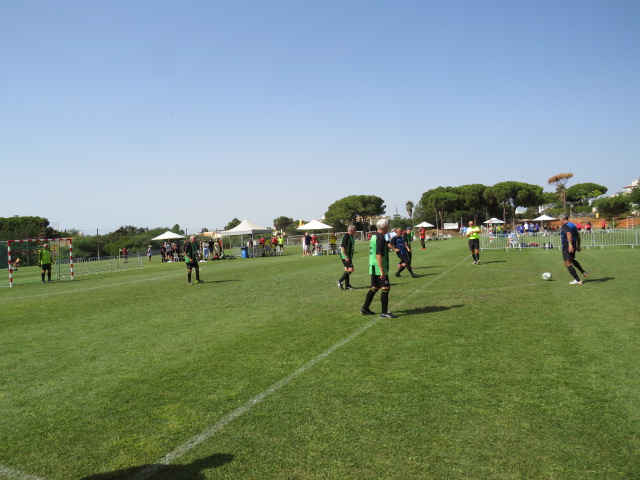 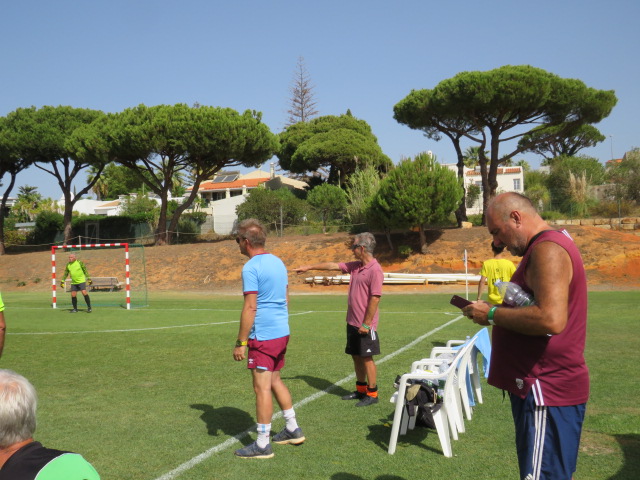 Day 1 saw them compete in Group A against local rivals Odiaxere and also Witney, Sporting Ramsgits and Solihull Villa. A disappointing start against the eventual group winners Solihull saw a 0-2 defeat, but the team improved throughout the day, drawing their second game 0-0 against Witney before winning their final two games, 1-0 versus Sporting Ramsgits (courtesy of a Brian Woollard goal) and then 2-1 against Odiaxere (with Brian again on the scoresheet and Adrian Jones netting the second). This left Tavira in a very creditable second place in their group.

Unfortunately, day 2 opened with a defeat on penalties to Browns B after a goalless match in the elimination match, which relegated the team to the Bowl and Wood play-offs. Here a win against Blackfyne thanks to an own goal 1-0 saw them into the Bowl semi-finals. A 3-1 defeat to Odiaxere (with Adrian Jones getting Tavira’s goal) saw them make the Bowl 3rd/4th place play-off, where a penalty shoot-out victory over Browns A saw them finish 3rd in the Bowl Trophy and take 11th place overall in the 20-team tournament. 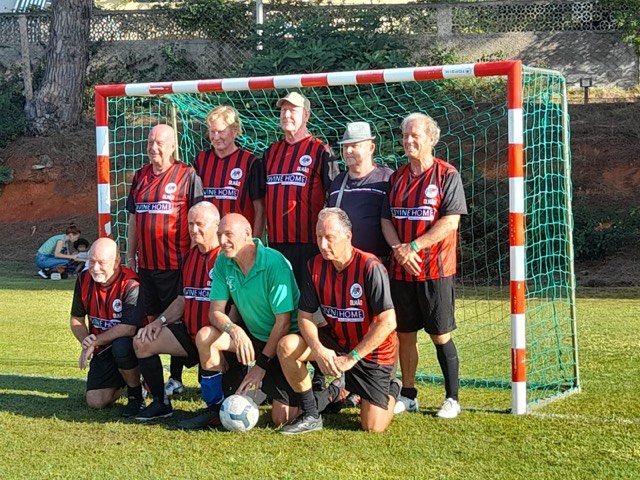 Another disappointing opening game saw a 0-2 loss against Portsmouth, but the team rallied to beat Oakville by 2-0 in their second game. Their final two matches were both unfortunately drawn, 0-0 with Blackfyne and 1-1 against old rivals Browns B. This left them in 4th place in their group on goal difference from Browns following Browns final match 10-0 win against Oakville.

Day 2 saw EAWF Olhão have to take part in an initial qualification game to try and reach the quarter finals, which they managed with an easy 4-0 win over Sporting Ramsgits with goals from Shane , Paolo (with 2) and Bjorn. Their next elimination match unfortunately ended their involvement in the main Cup and Plate trophies after a penalty shootout loss against SC Farense after a goalless match. Thus EAWF Olhão joined EAWF Tavira in the Bowl and Wood play-offs after both teams lost on penalties to a local rival.

A win against Sauchie Juniors B by 3-0 with two goals from Paul and one from Shane saw them advance to the Bowl semi-finals, where they fared better than EAWF Tavira by winning their semi-final 1-0 against Browns A with a gem of a goal from Shane to finish the tournament in the Bowl Final against Odiaxere.

With 2 minutes of the final left EAWF Olhão went 1-0 down, but within 45 seconds the ball came down the middle from a class throw out from keeper Johan with Paul Burn latching on to it. A drop of the right shoulder, movement to the left and a shot into the top corner sent the final to penalties. After the first 4 penalties it was 2-2; Paul smacked his into the right hand corner, but Odiaxere equalised again. Then up stepped keeper Johan and scored. Odiaxere’s keeper also scored, but was ruled to have stepped out of the box and so his penalty was disallowed giving EAWF Olhão the victory 4-3 to take the Bowl Trophy and 9th place overall in the 20-team tournament.

There was some controversy in the other two day 1 groups, with two teams fielding underaged players (though more due to a lack of understanding of the rules than outright cheating it has to be said). In Group D, SC Farense won all 4 of their games to top the group with Tweedvale, Sauchie Juniors B and Charlbury all winning two and losing two and Calne being penalised and losing all 4 matches.

In group B, Sauchie Juniors A were penalised and stripped of all their points. Here Birmingham were the table toppers with a maximum 12 points, followed by Browns A, Oakville White, Exeter and then Sauchie Juniors A. Sauchi Juniors A’s penalties didn’t seem to affect them too much on day 2, where an unbeaten performance without their underage player saw them take the over 60s Cup Trophy with a penalty shootout deciding the final against Portsmouth, with Browns B taking third place. SC Farense won the Plate Trophy (5th overall), while Witney won the Wood Trophy (13th overall).

A fantastic result for EAWF in the over 50s tournament as usual, taking the main tournament win yet again, with a creditable 4th place as well.

EAWF Olhão over 50s have now won six of the seven Algarve WF Cups in the over 50s section, stretching back to 2017; they were runners-up in the other one, when EAWF Olhão over 60s were also champions. We seem to like playing in this tournament…

We didn’t fair so well in the over 60s this year finishing 9th and 11th out of 20 teams which is a shame as we were defending the trophy, but plenty of things to work on for next time.

All results etc. can be opened in a new tab and downloaded as pdfs by clicking the links below:

Many thanks to Steve Johnson, Stuart Meakin, Andy Smith, Jon Syed and Karl Chapman for providing reports for the website