A Christmas Message from our President

I would like to thank East Algarve Walking Football who honoured me with the presentation of an award and commemorative shirt at the recent Christmas Dinner attended by over a hundred guests. 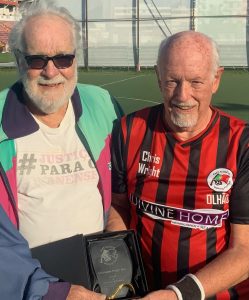 Oistein Lovell presented the award and shirt at the Christmas Dinner

Little did I realise when I introduced WF to the Algarve some eight years ago the impact it would have on so many peoples lives. It has been a difficult year and those who give so much of their time to ensure that the ethos of WF continues – fun, fitness and friendship – deserve our thanks and gratitude. During the year many of us have been touched by the unbearable loss of family and/or friends but have found comfort and solace through the club’s collective support. The Times newspaper recently highlighted WF through its Christmas Charity Appeal and I quote one player who took up WF after his son took his own life, “I joined just to come and play, just to get out,” he says. He has trained as a mental health first aider and views his role in the club as helping a demographic that doesn’t always support itself: men. “I always have my door open for people who want to talk. I’m not afraid to talk about what I’ve been through. I play because I lost my son. Walking football saved my life.”

Here in the Algarve there are many charities who have benefited from the thousands of euros raised by East Algarve Walking Football, East Algarve FC and offshoots such as the cycling group including their popular Santa Ride. We wish these charities every success in the future as they strive to support the most vulnerable members of a society we are fortunate to be part of.

In closing I would personally like to thank Jan de Wee and Divine Home (Moncarapacho) for their recent sponsorship of high quality EAWF shirts. It would also be remiss of me to not mention my son Jon (SportsBanger, London) who has supplied a further set of shirts.

There are many individuals and groups who support EAWF and we extend to them our most grateful thanks.

I wish you all a very festive season and a healthy 2023 filled with ‘fun, fitness and most importantly friendship’. 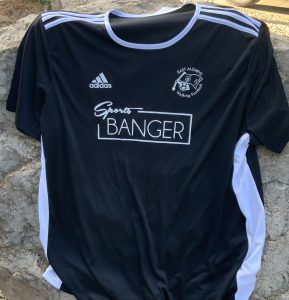